A post from Faking News.. NIce satire on IRCTC tea and coffee quality

Last evening in a superfast train, a passenger yelled at the pantry staff after he found the coffee tasting milky. A similar incident happened to his co-passenger who bought tea.

“First I thought that in the coffee they might have mixed few droplets of 4-5 days old milk as usual, but afterwards I was shocked to know that the coffee I was drinking was made with ample quantity of fresh & pure milk!” a shocked passenger told Faking News, “For years, I was so used to the railway pantry tea and coffee that I loved it, but this coffee has totally ruined my taste buds. I won’t leave them until I get my compensation!”

Soon after this news started trending on social media, senior railway officials conducted a high level meeting to look into the matter of grave concern.

“In relation to this complaint, the food testing authority has found high amounts of fresh and pure milk particles in the coffee and tea samples. Adding milk into coffee would not only make the passengers greedy for pure milk coffee but would also burn our pockets. If we start adding milk to every passenger’s coffee, how would we add milk into our own coffee?” an official explained the entire problem to Faking News.

“We have already suspended the pantry staff who was responsible for this mishap. We have also decided to provide a compensation of Rs.5 lakhs to both victims,” the official further revealed.

Gandhi Bot and Respect to Gandhi

We all pay homage to the Father of our Nation, Mahatma Gandhi every year on Gandhi Jayanti, celebrating it as a dry day. And one fool of a comapny in capitalist US used his name and picture on beer cans and bottles. How disgusting, disrespectful, idotic, irresponsible and shameful behavior! They have insulted Gandhi, India and the feeling of respect to our great hero, our national icon. How dare they!
To us Gandhi is as important as Goddess Lakshmi. To us, he is as important as our dignity in the society and to us, he is as important as our currency notes which give us that dignity. And they disrespected him. Thankfully, someone has filed a case against this fool of a company at Cyberabad, contending that Gandhi’s image on the alcohol cans  by the brewery is highly condemnable and punishable under Indian laws like Prevention of Insults to National Honour Act, 1971, and 124-A of IPC (related to use of inflammatory words, signs or visible representation).
TO this, the company replies, “We do apologize if the good people of India find our Gandhi-Bot label offensive. Our intent is not to offend anyone but rather pay homage and celebrate a great man who we respect greatly. They go on with blatant display of shame in saying “Aromatic and fully vegetarian, Gandhi-bolt is an ideal aid for self-purification and the seeking of truth and love”
And they dont stop here. They are adding punchlines- “We hope that not only our product is consumed responsibly with fine food and friends but that they are also inspired to learn more about Mahatma Gandhi and his non-violent methods of civil disobedience. So many Indian people here in American love our tribute to the great man,”
They should learn how to respect Gandhi from us, Indians.  His statues keep on biting dust, for 363 days a year, sometimes, 365.25 as well! His principles long forgotten by all except a politically retarded old man in white caps and an ‘anarchist’ chief-minister. This year was even great. People were busy taking selfies and photographs with brooms, because Gandhi believed in cleanliness. Its really great that a PM helped his citizens remember Gandhi’s cleanliness freak 77 years after his death. Thousands of roads and streets have been named after Gandhi. Do we even think twice before spitting on the same roads! We stock alcohol on 1st October to celebrate the dry next day. That’s how we respect Gandhi! Who cares for Gandhi, except for the fact that his face appears on the notes. The notes which is circulated in so many hands in a day and finally kept in wallets, near the bums. Occasionally, to avoid breathing difficulties to Gandhi, people also have to fart. This is how we celebrate the cult called Gandhigiri
i. 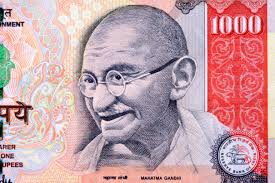 Who resorts to non-violence after drinking, except the Munna bhai saying Lage raho! Who cares to bow to any statue of him even for a second. And who walks without slippers on roads named after him!
I request Arnab Goswami, on behalf of our countrymen to raise this issue in his show so that Gandhi meets justice, as his shows have far-reaching effects.
@piyushKAVIRAJ