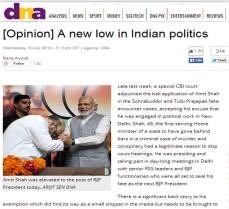 Article on Amit Shah by Rana Ayub pulled down by DNA

This article, published by DNA newspaper group, on Amit Shah has been pulled down by DNA: check http://www.dnaindia.com/analysis/standpoint-a-new-low-in-indian-politics-2000913 … Looks like a new low for media self-censorship!! Now that Amit Shah is BJP National President, and even his lawyer a Supreme Court judge, even the not so wise should get a glimpse of whats in store next.. Rana Ayub has tweeted “Feel terrible, disillusioned with the state of media. Will not be writing for @dna henceforth. Had great respect for them. Alas !” an hour ago.

The article is as follows, without any modification……

Late last week, a special CBI court adjourned the bail application of Amit Shah in the Sohrabuddin and Tulsi Prajapati fake encounter cases, accepting his excuse that he was engaged in political work in New Delhi. Shah, 49, the first serving Home minister of a state to have gone behind bars in a criminal case of murder and conspiracy had a legitimate reason to skip court hearings. He was presiding and taking part in day-long meetings in Delhi with senior RSS leaders and BJP functionaries who were all set to seal his fate as the next BJP President

There is a significant back story to his exemption which did find its way as a small snippet in the media but needs to be brought to light as Shah, the man who waved the magic wand for BJP in Uttar Pradesh, the PM’s confidante and the number two in the government now takes over the reins of the party. Amit Shah had twice in the past sought exemption from personal appearance citing political work, but the then CBI judge JT Utpat had found his excuse inadequate for the court to grant him relief. On June 20, while hearing the application, Utpat allowed the same but made a scathing remark “Everytime you are giving this exemption application without assigning any reason,” he told Shahs counsel. In less than a week, Utpat was transferred to a Pune court before he could preside over Shahs discharge application. Shah managed his way out with a tried and tested formula of transferring judges, practiced brazenly in his home state of Gujarat through his tenure as Home Minister.

As a journalist covering Gujarat extensively since 2005, as someone who exposed Shah’s role in the fake encounters in the state and who can claim to have knowledge of his political trajectory, I would not mince my words in suggesting that by appointing Amit Shah as the president of the party, the BJP has hugely disrespected the law of the land and signalled an all time low for the criminal justice system of India. For the cases against Shah are for crimes so gruesome that the cloak of political astuteness will be too short to cover it.

In its chargesheet filed in the Sohrabuddin fake encounter case, the CBI which had been investigating the case under the watchful eye of the Supreme Court of India had not just named Shah as one of the key accused and conspirators but also named him as the head of an extortion racket which involved underworld thugs, politicians and businessmen. In its submission before the apex court bench of Justice P Sathasivam and Justice BS Chauhan, the CBI stated that the minister was in cahoots with senior cops from Gujarat including the likes of DG Vanzara and Abhay Chudasama who had been sentenced for cold-blooded murder – concluding that Shah was a hardcore criminal. Shah was also chargesheeted in the murder of Kauser Bi, the wife of Sohrabuddin who according to the official papers was raped, sedated, killed and her body burnt and thrown in a river.

One could have well debated the merits of the CBI chargesheet and read political motives but for the fact that the Supreme court itself gave CBI the sanction to arrest Shah at the same time, coming down harshly on the Gujarat state police investigation led by the then top cop Geeta Johri for going slow and misleading the courts. If the SIT verdict on Narendra Modi’s role in the Gujarat encounters is to be held as the final word, by virtue of it being monitored by the apex court, it is baffling then that Narendra Modi who promised clean and transparent governance to this country and setting up fast track courts to look into cases of criminal charges against politicians has turned a blind eye to Shah’s criminal past.

Shah has been Modi’s confidante since his days as a pracharak in Gujarat and Maharashtra. With Shah’s induction on the national scene first as the General Secretary of the BJP and now as the BJP President, Modi has risked his own political image for the sake of his ally and friend who has put to shame the best political pundits and strategists from North India with his shrewd manoeuvring. In the coming days, the party will have to prove its popularity not just in the by-elections of Uttar Pradesh but also in the forthcoming Assembly Elections in three states, the most significant being the battle for Maharashtra. Party insiders have stressed on Maharashtra being a prestige battle for Modi whose party swept the Lok Sabha elections a couple of months ago. Going by the minutes of the internal meetings held between Modi, Shah and senior heads in the BJP and the RSS, the Prime Minister has silenced his detractors in the party who were against Shah’s elevation citing his ability to churn out big numbers.

Many in the Gujarat BJP believe that Modi has been under tremendous pressure by Shah to return the favours he has allegedly bestowed on his mentor in the last two decades of their association. It’s a well known fact that during Modi’s rebellion against former Gujarat Chief Minister Keshubhai Patel and in his fight with the ex-Home Minister of Gujarat Haren Pandya, it was Shah who stood firmly by Modi’s side galvanizing the cadres and leaders in favour of his boss.

As the second in command in the Modi dispensation, the youngest minister in his cabinet who held charge of twelve ministries including the powerful Minister of State for Home, Shah single-handedly thwarted all trouble that came in the way of Modi with his office getting the infamous tag of the “dirty tricks department of the CM”. It was under his tenure as Home Minister that the Gujarat police went on a spree of fake encounters in the state – holding regular press conferences for the media with the bodies of the alleged assassins on display. The officers would claim that the Gujarat CM was under threat from jihadists who were out to assassinate the man who brought back Hindu asmita in Gujarat.

While the chief minister managed to leave unscathed during the investigations of most of the encounters which were later pronounced as fake, Shah found himself listed as the prime accused in three encounters, his role in the other two being probed by the CBI with investigations in the case still on.

Another major dent in Shah’s image came with his alleged involvement in the Snoopgate scandal, in which he is heard instructing one of his key lieutenants – IPS officer GL Singhal who was then incharge of the ATS, to carry on surveillance on a young woman. The tapes which were released late last year created a furore after it became obvious that Shah as the Home Minister of the state was using state machinery to snoop on innocent civilians, monitoring their moves. In this particular case, a young woman whose movements, including aspects of her personal life were being reported to the CM on a daily basis.

With such serious criminal charges against him, has Modi denigrated the position of the party president by handing over Shah the reins of the party. Would it now be safe to assume that Prime Minister Narendra Modi acted against the interests of the judiciary by rejecting the nomination of Gopal Subramaniam as a Supreme court judge as he was also the amicus curiae in the Sohrabuddin fake encounter case. Ever since the Prime Minister assumed office, ex-CBI directors including Ashwini Kumar and AP Singh who were at the helm of affairs in the CBI during the investigation of the encounters, find themselves being at the receiving end of Shah’s wrath. While Kumar has stepped down as governor of Nagaland, AP Singh is reportedly under pressure to step down as member of the UPSC after the Income Tax department served notices to him and his family members in an investigation into alleged tax evasion by meat exporter Moin Qureshi.

These could all well be coincidences if one were to take a larger liberal view of the developments including the transfer of 89-year-old ailing governor of Gujarat Kamla Beniwal, who under her tenure locked horns with Modi and Shah over the appointment of Lokayukta in the state. But even if one were to dismiss these actions against officials, lawyers, judges who played significant roles in the criminal justice process involving Amit Shah as conjectures, will it not be pertinent to suggest that by appointing Shah as the BJP President, Modi has acted in contradiction to his promise of a free and fair government, which will have no space for vindictiveness. Hasn’t Modi and the BJP under the guidance of the RSS just made the first attack on the principle of clean governance on the basis of which the party came to power? Prime Minister Narendra Modi needs to answer this one.

Rana Ayyub is a journalist and a writer. She tweets at @RanaAyyub

Author of "Mahlon Ko Bikte Dekha Hai", Crumpled Voices 2, Jazbaati Galiyaan; Avid reader and writer, love for languages, especially Hindi. Aspiring socio-political activist. Poet and philanthrope!! Have been writing poetry since school days and trying to write better poems with every passing day. We owe so many things to the society and we can't get rid of our responsibility of returning the favour. Trying to contribute to society through writing and any other help possible, be it through guidance to students, cancer patients and their relatives or blood donors.

2 thoughts on “A new low in Indian politics, or Indian Media?”