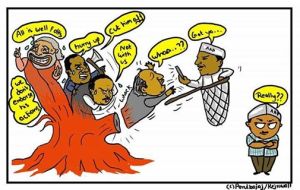 Watching news channels these days sends only one message- Television media is in a bit of dilemma- who to support! Congress remains the ground spectator with a few of its spokespersons claiming to win a handsome number of seats, in case of a re-election; while amusing the audience. Nevertheless, as Bhagwant Mann pointed out in a Mumbai conference, Delhi temperature soars higher in degree Celsius than the number of congress MPs and Lalu Yadav may have more children than their number in Delhi Assembly. Thus, no one is giving a damn about the party. Rahul Gandhi himself is more interested in dhol-beating of Modi.

Everything was crystal clear when Mr. Jung wrote to the President, and people might have embraced BJP government in order to avoid a no government situation when this hell of a video stung the BJP ‘Sher’. That turned the tide. BJP people have gone to the extent of denying Mr. Dagar as an authorized person and issuing show-cause notice to him simultaneously, leading to tweets asking if BJP has a separate department for horse-trading!! Nevertheless, a BJP state vice president being a nobody with Rs 4 Crore, is justified to an extent as Modi and Amit Shah are the whole and soul of the party.

So, media is trying to decide between the labeled ‘Dramebaaz’ AAP and ‘Saint’ BJP, thanks to the sting by ‘unemployed’ AAP and Arvind Kejriwal. While apologizing to the public about quitting as Delhi CMs on grounds of principles, Kejriwal has once again ‘exposed’ and made the people gape. Amongst the news of horse-trading and AAP sting, the media fraternity seems to be divided as who to support and how much to support. It has created four factions.

The second faction includes some channels who have decided not to telecast sting related news but focus on Kashmir floods. Good that they have something to report about Kashmir, without involving religion and Pakistan. Some channels, the third faction, have tried to dig out AAP related negative news and are telecasting them. They would be revisiting history till they are lost in history. The fourth faction is trying to created news against AAPs to continue pleasing their ‘political and corporate bosses’. The fourth faction is to be beware off! They change their loyalty as per their need and may come up with any twist in the tale, for which media is infamous for, in public.

A recent interview of a poet-cum-AAP leader speaks a million. He wants to convey that opposition doesn’t mean continuous criticism but also praising something good, if being, done by the government. If he praises Modi for visiting Kashmir, what is the harm in that! Don’t we expect praise when we do something good? Besides, his identity and existence is due to his poetry. If he attends an event involving a poetry session, why should it be politicized? Assuming a hypothetical situation, if due to some reason Dr Harshwardhan is in a flight and has to give treatment to a fellow congress traveler during a medical situation, does this mean he is on the edge, and against Modi now! Should he remember his medical duties and treat the ‘congress’ patient or act like a BJP member and deny any treatment! Anyway, the fourth faction will not be able to understand my logic. Thus, I should write about the first faction now.

The first faction should have been, ideally, the only faction of media. That is what media is meant for. This faction is supposed to follow the best policy- honesty. Why should media get into a dilemma of taking sides? Wasn’t the media supposed to be unbiased? Media was supposed to bring to people what’s happening around, without their prejudice and verdict. It was supposed to convey the information and not the message of their ‘bosses’! Of course the honest people are doing their job in media, but, being the honest brats; they don’t indulge in self-advertisements and sensationalism. No wonder they don’t get heard many a times. Thus the first faction is not able to make themselves visible due to their principles. Some of them prefer resigning than continuing in their organization when overtaken by businessmen. They are proud of their principles. Everyone should be! But then, even Kejriwal talks of principles. This faction should have tried to analyze this and voiced what they felt!

Author of "Mahlon Ko Bikte Dekha Hai", Crumpled Voices 2, Jazbaati Galiyaan; Avid reader and writer, love for languages, especially Hindi. Aspiring socio-political activist. Poet and philanthrope!! Have been writing poetry since school days and trying to write better poems with every passing day. We owe so many things to the society and we can't get rid of our responsibility of returning the favour. Trying to contribute to society through writing and any other help possible, be it through guidance to students, cancer patients and their relatives or blood donors.